A very common question among pedalboard beginners is “What is the best guitar effects pedal order?” The order of your effects plays a huge role in how they interact with each other and shape your sound. Unfortunately there is no “right” answer to this question. In fact there are seemingly endless possibilities for how you can combine and order your guitar effects. While there are a couple traditions or conventions for the order of your pedalboard, there is no wrong way to do it. Using a non traditional order for your guitar effects can create surprising and unique results. This can be key to creating a unique tone that you can call your own.

Let’s start with going over some of the traditional ways to order your guitar effects. Then we can look at some key ways to break these conventions and get interesting results. 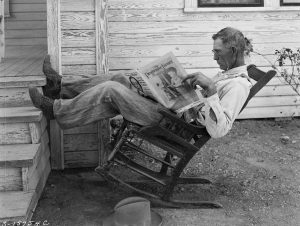 Alright, so this is probably what your great great grandfather’s pedalboard looked like back in the day. It was a time when a man worked the land, maybe owned a couple cows, and never put reverb pedals before distortion in the pedal chain. These were stricter times and no woman or man is tied to such conventions in the 21st Century.

Now don’t get me wrong there are a lot of reasons why most pedalboards will follow some of these conventions. So let’s start from the top and examine each element and why a traditionalist would argue for it’s position in the pedal chain. 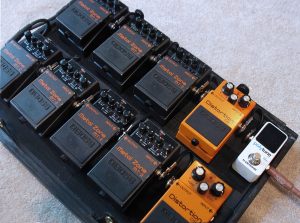 Let’s ditch that traditionalist guy and create a pedalboard with limitless possibilities, a pedalboard for the 21 century. Now obviously you can create some pretty terrible sounds with this approach (e.g. a pedalboard made up only of 7 back to back Boss Metal Zone pedals). However, if you experiment you can also create some really beautiful sounds! I’m going to provide a few recommendations below but obviously I can’t cover everything. The key is really going to be thinking outside of the box. So here are some “unconventional” ideas you can try out on your pedalboard.

Try a Phaser After Your Reverb Pedal

This can really bring some more life into your phaser and create a more noticeable sound with a lot of movement. Rather than just phasing your vanilla direct guitar sound you’ll be phase shifting the whole wall of sound created by your reverb. This phase pedal is a great option if you are going for this kind of sound.

Modulation Pedal Before a Delay Pedal

This caused each modulated sound to echo and overlay with future cycles of the modulation. With many combinations this can blend the modulation sound and make it less noticeable and more subtle. We are a huge fan of the Walrus Audio Julia for interesting modulations.

Distortion after Reverb and Delay

When I heard this my first thought is Lo-Fi. You can really squash up your reverb into a crushed up mess that sounds pretty awesome. You can also use this tastefully. A light distortion on a small sized reverb just creates lush ambience. A heavier distortion after a delay creates an awesome lead sound with a lot of character, similar to the Echo Drive used by Josh Homme of Queens of the Stone Age. Try this one for a similar sound.

If you move a delay pedal after your reverb it will echo the space created by the reverb. This can create depth and more unnatural sounds that trick your brain.

Move Your Tuner Later in the Chain to Mute Noise

This can be helpful if you get yourself into a pickle while playing live you can just turn on your tuning pedal to mute whatever noise or feedback you’ve created. It does have the downside of potentially not getting accurate tuning if you leave too many effects on while tuning. It’s hard to beat the Poly Tune 3 for accurate readable tuning.

Move Your Compressor After Distortion or Overdrive

Moving your compressor later in the guitar effects pedal order can expand the sound of certain distortion, overdrive, and fuzz pedals. Rather than putting your compressor at the beginning of your chain, which can add sustain while maintaining clarity.

Use a Wah Pedal Before Delay for a Talking Echo

Using wah before delay can add a really interesting character to your echos that doesn’t sound like your typical Hendrix wah guitar solo. While this part of the traditional guitar effects pedal order it is an exteremely useful sound. If you open or close the wah on a single note the delay will echo that modulation each time, which gives a kind of talking voice effect.

Use an Overdrive After Your Fuzz Pedals to Smooth Them Out

If your fuzz pedals stick out too much from your other sounds this can be a great way to tame overly bright pedals. Just pick your favorite overdrive or distortion pedal and put it after the fuzz pedal in your chain. I recommend turning the gain just about all the way off on the ovedrive pedal and rolling the tone to a warmer setting. Example: if you have leave a tube screamer always on with a low gain/warm setting, your fuzz pedals placed before the tube screamer can be switched on for new sounds that don’t totally contrast your overall sound. A Tube Screamer or Fulltone OCD would be great for this.

I’m sure there are many more way you all use your guitar effects pedal order to alter your sound. Let us know in the comments your favorite pedal chain order. Thanks y’all!

Top Guitar Pedals is a website dedicated to finding the best guitar pedals for every musician. We aim to provide a resource for guitarists and musicians looking to improve their sound. Our goal is to explore the best guitar pedals, effects, and stompboxes through gear reviews, gear guides, and blog posts.